Book 1 “The Soul of A Vampire” series  will be released in the middle or end of March, 2017. If you are a fan of my books, and love Vampire books, and you have an account with Amazon, I will provide you with an Advance Reader Copy (ARC).

You will have to give me an honest review on Amazon no later than a week after release. If you meet those requirements, then contact me at rachelerice04@gmail.com and I will provide you with a free copy in mobi, epub, or PDF. Thank you for being a fan of my work. 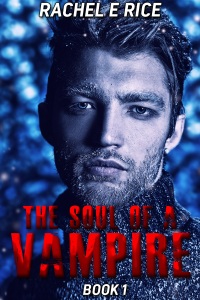 When Zoey Miller was kidnapped as a young child, she never expected to meet the man whose family stole her innocence. After years of trying to remember that harrowing time she finally realized that the nightmare she tried to remember faded away.

All she wanted to be was a normal twenty-one year old and go out to a bar with her girlfriend, but life isn’t what you want it to be it just is. On that night her girlfriend died and Zoey ended up in a coma.

When she woke, it was three months later, and standing before her a handsome pale stranger who refused to answer her questions.

All Sebastian Vesper wanted was to keep Zoey safe and prevent her from finding out about him, and especially his family, who wants her dead. He soon discovers that keeping Zoey safe is not so easy, especially with a bounty on her head by a witch who is in love with him, and a brother who wants to put a stake in his heart.

When the Super Bowl is over, and you’ve settle down and ready to step out of the real world and into the world of Fantasy where truth and facts don’t exist, all you need is your imagination to step into my Fantasy world.

If you’re in Amazon’s library, you can read all three books now for free.

However, on February 6 to the 7th my fans can get all three short books (A Bride For A Werewolf) for free for their library on Amazon on Monday and Tuesday (Feb 6 and 7). Enjoy! Click below. If you enjoy this series please leave a review.

If you’re a reading junkie and you can’t get enough Science Fiction and Fantasy books click on instafreebie promo and make your selection. Enjoy!

Happy New Year. I will inform you of another group of free Science Fiction and Fantasy books on Instafreebie. Look for the newsletter.

Damon in Moonscape is published. You can get it for $2.99 for a short time. It’s the 10th book in the Insatiable Series. You don’t have to read the Insatiable werewolf books in order, but you should read the first three or four books in each section. To pay less try the box sets. Enjoy.

On January 9th through January 13, 2017 there will be free a Science Fiction and Fantasy

giveaway. Look for an email.

My giveaway of Damon is only for chapters 1 and 2. To purchase the entire book go to the vendors above. 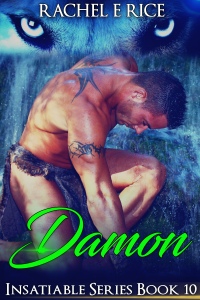 This is chapter 1 of “Damon.” It’s a work in progress and there will be changes made before it’s published. Since you signed up for my email, I thought you would like to read what I’m working on next. Look for it in January, 2017. Remember most of my books are for adults 18 and over. If you have comments, suggestions, or inquirers, you can contact me at:  rachelerice04@gmail.com

I’m always interested in your comments concerning my books. Enjoy!

“You can’t treat Saadia like your bitch. She deserves a better man than you.”

“I’m not a man. I’m a werewolf. Or have you forgotten dear brother,” Tracker said as he stepped closer to Damon looking him in the eyes trying to provoke him, reminding him of his status in the family as a beta.

“You’re not even a good werewolf. Look at you,” Damon snapped. “No amount of riding that motorcycle and dressing in those black leathers will make you a man or werewolf.” He flung Tracker’s leather jacket across the room where it rested on the limestone floor.

Tracker’s eyes followed the jacket. He loved that jacket. When Damon touched his jacket it was as if he laid hands on him. Tracker took that as an insult. Damon wanted it to be just that.

“If you’re searching for something you’ve missed it,” Damon said with loud emphasis. “You had your chance with Saadia. Now I want a chance to make her happy.”

Damon stepped back realizing he’s wrong. Not seeking a confrontation but he was just pissed. Damon was never one to run from an argument or fight, however, this is different. They are full grown werewolves. When they were pups, the only thing that might have occurred would be a wounded ego or torn ear.

“What?” Tracker replied in a threatening stance. His legs wide his eyes steely blue.  He stepped up to Damon meeting him eye to eye with a furrowed brow. This time Damon didn’t give ground.

“You want to fuck Saadia?” Tracker said laughing. “That’s what you want little brother. You want to fuck her. Have her bend over so you can take her from behind. The way no human female will give it to you. The way I can get it from her? ”

Damon shuddered with contempt. He flexed his hands. His breathing grew loud.

Turning his back still laughing at Damon, Tracker strode to the fridge, opened it, and looked around for something to eat. He found fresh lamb. Picking up a leg, he took a large bite. The blood dripped on the counter. He reached for a paper towel and wiped his mouth and then the counter. Then he watched at Damon as sweat dropped from his nose. It was a sign that he was angry. Downright pissed at Tracker and Tracker knew it and shot him a wide grin and chuckle.

“Did you get a boner every time you got near her thinking about putting your cock in her? Well dream on little brother. You’ll never get a chance to smell her. She’s mine.”

Damon stood glaring at Tracker wanting to walk away but his pride wouldn’t let him.  Would he admit to Tracker something that had been obvious to everyone but Saadia? No he wouldn’t be pulled into Tracker’s game. He calmed and took a deep breath. Tracker would enjoy him admitting he wished he could sleep with her, and make love to her outside under the stars and in listening distance of Tracker.

Damon wished Saadia would give him a chance where he could punish Tracker for his arrogance and ill treatment of her. Make Tracker work for Saadia for once.

“I see it in your eyes. You don’t have to admit it,” Tracker said breaking into another round of laughter. “You can’t fuck her because she won’t let you,” Tracker said his voice energetic and every time he took a bite of food he let out a chuckle and watched at Damon squirming.

“I don’t want to fuck her. I want to make love to her.” Tracker stopped chewing on the lamb.

“You would. Have you used that brain for anything other than to interfere in everyone’s life?” Tracker laid the half eaten leg on the counter, leaned forward and peered at Damon.

“Unlike you, I don’t use my dick for my brain,” Damon said. And Damon stepped away from Tracker.

If you can’t get enough Science Fiction and Fantasy Books, here is a new round of free books for you to fill up your EReaders . Click here and browse then select your books. If you’re looking for something different go to Instafreebie starting Dec. 12-18. However, you can get them now. Enjoy. Look below for more information about my books. Remember Rachel E Rice books are for matured adults 18 and over.

Don’t forget to pick up Tracker#8 for free  if you haven’t already. My free giveaway will end December 18, 2016. So if you’re reading my Insatiable series and you want to keep up with these hot Samsa werewolves, look for Tracker. Next in series Book 9 Thorn. Enjoy!

Coming soon in the Insatiable series is “Damon.”

You can still get Hunter’s Moon for free, on Instafreebie without a code, as part of a new set of Science Fiction and Fantasy books giveaway. If you haven’t claimed your copy of Hunter’s Moon it’s still available. And you can get “Moon Tide” book 6 for 0.99 on Amazon, Barnes and Noble, Apple, and Kobo for a limited time. Starting now until the end of November you can get a starter library for your Ereaders. Tell your friends and please leave a review.

Amazon, Barnes and Noble, Apple, Kobo, Smashwords,  All Romance eBooks, Scribd,  and where all Ebooks are sold. If you purchase your books at AllRomance eBooks, all books in the Insatiable Werewolf series are half price.

Remember my books are for matured adults 18 and over.

Beginning in January 2017 I will continue the Insatiable series which will have more books covering the lives of the Samsa werewolves. You will see the return of the Lion shifter, the Alaskan werewolves, and welcome three more of Lycell’s yearlings as well as the birth of Wilder and Adrienne’s pups.

My plans for 2017 are to write a  Vampire series. If that goes well, I will publish 3 novels for the summer, and continue with more books if the readership is there.

“Hunter’s Moon” box set contains three stories with the just published “Moon Rapture” which will feature the yearling werewolf, Hunter Samsa. His loves and his difficult life becoming an adult werewolf will delve into the pain he endured in the wilds of Alaska and the love he sought and loss when he returned home. If you haven’t read these stories and you’re looking to save money, the box set is for you.

To discover all my Insatiable Werewolf books go to: Apple, Nook, Kobo, Amazon, Scribd and Google, and where all E books are sold. 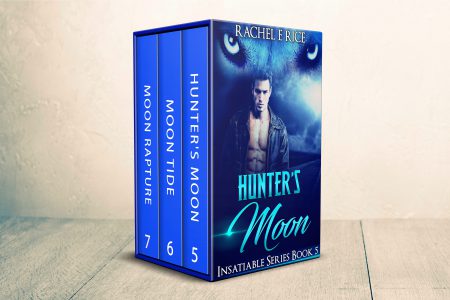 Come along on his journey where his heart will break, his love for one female will end, and his new love will begin only to have that love snatched away by a mortal enemy. Hunter and the Samsa werewolf clan’s story will not end in book 7. There are more stories to come.

Hunter’s brother Tracker, by Adrienne and Lycell, has his own story and it will begin when he becomes a yearling ready to face the world, where two of his six brothers (Damon and Thorn) will be caught up in Tracker’s dark turbulent life because they are a family of werewolves and they follow the pack leader wherever he may go.

Remember, my books are for matured adults 18 and over. Coming Soon! Tracker book 8 and  Thorn book 9 and Damon book 10.

Moon Rapture is available now on   Amazon, Apple,  Barnes and Noble, Kobo, Smashwords, Google,   Scribd and where all Ebooks are sold. For a short time you can purchase it for $2.99. Enjoy!

Coming soon The Bad Boy werewolves of the Insatiable series, “Tracker” and “Thorn.” 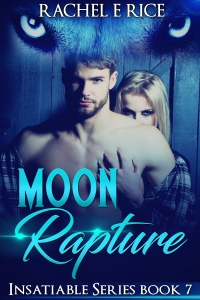