For those of you who liked the first book in the Blackstone series and you want more here is the reading order:

Book 1 The Incredible Mr. Black is free on InstaFreebie.

Excerpt from Book 2 Temptation In Black is below. You can purchase it on: Amazon, Barnes and Noble  ITunes, Kobo, and most retailers Google, Smashwords 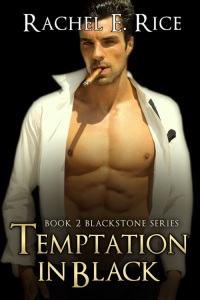 “Why did you do that, Alex? You knew I wasn’t ready. What’s wrong with you?” He glanced down at her. “Are you becoming dangerous to me?” Max’s voice heightened with cool restraint, which caused the hair on Alex’s arm to rise. He sounded like a wounded animal. How could something be wrong, you handsome, crazy fuck? I just read that your fiancée has been found strangled, and you didn’t tell me about your twin brother. How could anything be wrong? I’m not the one lying around one of your apartments dead. I’m perfectly happy.

Voicing her thoughts was not an option since she was riding in his limo with darkened windows, and Max still had an erection, and the doors were locked, and his bodyguard/driver, a burly Asian named Shu, who resembled a ninja warrior and dressed in black, never as much as spoke or smiled at her. With an out-of-control sex addict and a ninja warrior, there wasn’t much she could do or say.

Concentrating was also out of the question. Her heart beat so loud that she thought she was being strangled by her own fears. The newspaper’s headline screamed in her head: Fiancée of Maximilian Blackstone: Strangled.

“Nothing is wrong, Max. Why do you ask?” she murmured glancing up into his to die for face from her kneeling position. She forced a wide smile. I’m in the right position for praying. Praying that my judgment wasn’t as flawed as I think, and that I didn’t select a murderer to father my child. I guess I was nothing but a desperate, eligible, eager, foolish young women who wanted only one man–Mr. Black.